September 22, 2009
When I first began telling the story of my grief and healing way back here, I drew a chart in my journal to help me remember and understand the stages I had been through. It looked like this: 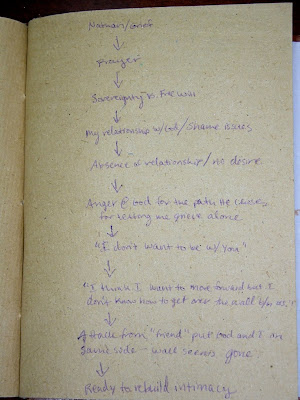 That's ten stages, if you're counting.

And in case you're wondering, after two-and-a-half months and nine blog posts, I've only managed to write about the first four stages. But don't panic. I am about to cover the remaining six all in one sitting. Okay, maybe you should panic after all.

Long after I made that chart, I realized the first four stages were all part of the mental and spiritual process I needed to go through on my way towards healing. They were big belief-altering, viewpoint-shifting issues that needed to be confronted, torn apart, examined bit by bit, and finally rebuilt. From grief to prayer to sovereignty to shame and grace—all of them hard-fought struggles, all of them exhausting and painful. But once I had gone through them, I entered the second half of my journey: the emotional process of reconciliation. Though greater in number, these stages were, to put it mildly, a whole lot less complicated. For the most part, they didn't even require much effort from me. They happened naturally as my heart ran the gamut of emotions and slowly but surely began to make peace with the One who had broken my heart and was patiently waiting to put it back together again.

When I first came out of the mental/spiritual half of my process, I was left with a rather large dose of apathy. Partly it was the result of being emotionally exhausted after months and months of active struggle. Partly it was the simple fact that I just wasn't ready to move towards reconciliation with God. But underneath all of that was the 'A' word: ANGER. Not just anger or even Anger but ANGER. Oh, I had been angry many times in the months following Nathan's death. But, without realizing it, I had never allowed myself to be angry AT God. To yell and scream AT Him for breaking my heart, for leaving me to grieve alone, for choosing this path for me and for us—a path that left me miles away from God. Shortly after Nathan died, I stopped believing God was listening. And being angry at someone without being heard by them only breeds more anger. So I pushed it aside for months and ended up feeling quite apathetic about being (or not being) in relationship with God.

Eventually and inevitably, my apathy turned to an unexplained bout of anxiety, followed days later by deep gut-wrenching, yell-inducing ANGER. I yelled, cried, vented, and sometimes just seethed at God over the course of several days before finally writing the poem entitled "Making War." I don't know if this is true for everyone, but for me, the artist and the writer, putting my anger into words and creating a tangible representation of it helped me to feel heard. Although I did not understand it then, I realize now that feeling heard by God was the first step towards the restoration of our relationship. Of course, had I known this at the time, it would have just made me angrier. I wasn't ready to reconcile. I was still angry, still deeply wounded by all that had transpired between God and me.

As the brunt of my anger began to recede, I started to feel both the extent of my hurt and the greatness of the chasm that now stood between us. But whenever I thought about God or sensed His presence, the only thing I could say was this: "I don't want to be with You." Because I didn't. I wasn't so much angry anymore, just hurt. And broken. And oh so tired. Tired of fighting, tired of trying to understand, tired of trying to believe, tired of trying to heal, tired of trying to make peace. My head kept telling me I needed to pursue reconciliation, needed to spend time with God, needed to move forward. But my heart was not ready. I could not even bring myself to ask God for the desire to be with Him because I knew He would give it to me, and I didn't even want to want Him.

I am thankful that no one really pushed me to overcome my own resistance during this stage of my journey. I think my wounds needed to heal slowly, in their own time—without poking and prodding from me or anyone else. I know now, of course, that God was at work even then, doing what I could not do, what I could not even ask Him to do. Again, I wouldn't have appreciated this thought while I was still in the midst of my process. To realize that God was still so intimately involved and intertwined with me even when I had completely disengaged from the relationship would have felt more like a boundary violation than anything else. How grateful I am that God does not cease His work in me because of my weakness, my brokenness, and even my unwillingness. He knew that someday I would be willing, and He faithfully made preparations for that day.

At some point, although I am not exactly sure when, my unwillingness did leave me. It was not instantly transformed into willingness, but I no longer felt the overwhelming sense of "I don't want to be with You." Because ever so gradually, I began to believe that I did want to be with Him. But I didn't know how. The gap seemed too wide, the passage of time too great, the baggage of our relationship too full to unpack and put away in the closet. And all of that added up to a brick wall standing between us, one that I had no ability to get over, around, or through. The first pangs of desire were stirring in my heart, but it wasn't enough. I needed something more. I didn't know what, but something.

That "something" came unexpectedly from the most unlikely of places. A long-time friend wrote a scathing letter attacking my morality, my grief over Nathan's death, my relationship with God, my faith, and all the work God has been doing in my life over the past few years. I never saw it coming, although in retrospect, perhaps I should have. Her words cut me deeply and, ultimately, brought an end to our friendship. It wasn't what I wanted. But in some ways, it was exactly what I needed. God and I had been standing on opposite sides of a brick wall, but when the accusations were made, they were made against us—not just me, but God, too. And suddenly God and I were on the same side. Maybe my need for God finally outweighed my reluctance. Maybe all the lies made the truth shine more brightly. Maybe my heart was simply ready to move forward. Whatever the case may be, I will not dignify the attack by saying it had any merit or that it was of God. It didn't, and it wasn't. But God knew it was coming. And He knew exactly how He would use it to further my healing and move us one step closer to reconciliation. For that, I am grateful.

As the smoke cleared from this friendship-ending conflict, I found myself sitting squarely in the last stage: I was finally ready to rebuild intimacy with my Creator. And that's how I began writing this story on Nathan's 19th birthday, July 7, 2009. I felt certain that I needed to remember and record the many chapters of this journey before I could begin the slow process of restoring a relationship that had been broken for nine-plus months. Of course, God knew differently. God knew that this writing of my story was not just an exercise in revisiting and summarizing. God knew it would be as much a part of my healing as the 10 stages that had come before. God knew this was stage 11. Thankfully, He didn't tell me that upfront. Or else I might have crumpled into a heap on the floor and refused to move forward. I do that sometimes, you know. Telling my story seemed like a difficult task but somehow doable. Telling my story while grieving, processing, healing, and rebuilding intimacy was entirely out of the question. Or so I thought.

As I wrote about each stage of my journey, it was as if I was re-living that stage all over again, albeit with greater awareness and a bit more understanding of what was happening. A single blog post would take hours and hours of writing over the course of days and sometimes weeks, not because of how much I was writing but because I was actively processing and working through the issues while I was trying to write about them. It's been emotional, exhausting, and time consuming. But it has been worth it. My newfound beliefs about sovereignty and prayer have been solidified, my release from Shame has been completed, the last threads of doubt and resentment towards God have been resolved, and, yes, the intimacy-rebuilding process is well under way. Because writing my story was not the obstacle or the prerequisite to rebuilding intimacy with God. It was the means by which we would begin the arduous pursuit of a better relationship, a pursuit that I hope will last a lifetime.
Anger God Healing Nathan The Story