When You Feel Abandoned 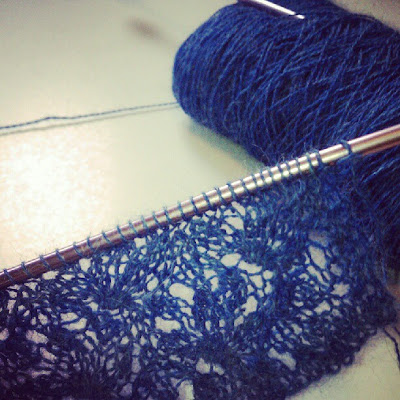 The needles click softly, one against the other, and the yarn slips through my fingers like a silent river, washing away the world.

The hours, they turn into days, weeks.  Yes, even months come and go while the pen lies still, connections fade right out, and I lose myself just like I lose everything else.

I might want to believe that I'm just wrapped up in the creating, this wild-eyed woman who can't rest until every last stitch is in its place.

But I'm not blind.

Even with my eyes shut tight against all that aches and burdens, the truth still lingers here like a fragmented dream.  So every day, I pick up the needles one more time, bury the head in this complicated pattern, and refuse to say the words out loud.

I feel abandoned by God.

The bald, ugly truth, it's lodged in the soul like a shard of glass, but I've no strength to wrench it out.  So I pull the corners of a tattered life together, hide that gaping wound beneath all this silence, and I knit as if nothing else mattered in the whole wide world.

Because who really wants to bare the soul when you're still waiting for God to show up--and you're just a bit terrified that He won't?

But then, who can bear to hide and tremble alone when you're feeling abandoned by the One Who loved you into life?

It isn't courage that's brought me to this moment right here, speaking straight out of the dark.  It's only this--a desperate longing to be found, known, loved.  One last shred of hope that I am not alone, that I am not abandoned.

I try to piece together the road that's gotten me here, and there's only one thing that I see clear--sometimes its the smallest things of a life that point a soul to despair.  Because I can't put a finger on the day it began--the when of all this--but I know the why and the how without even thinking.

My beloved cat, she's been ill for months and I feel it deep, as if God's mocking this woman He's already burdened with a decade of chronic illness.  It nearly breaks me, caring for my kitty and myself, making medical decisions for us both.

And then comes this:  The job I've held for eight years, the one that keeps the high cost of treatment from bowling me right over--the bottoms falls clean out one morning.  For long weeks, I'm left waiting for a phone call that will leave me without an income, without a way to obtain my own medicine.

In four years' time, I've already lost home and independence and loved ones and all my dreams for the future.  And there's this one bitter part of me that wishes God would just stop with all the reprieves--those weeks and months between loses, the ones where I start to heal and hope and live again.

And the resumption of all that loss?  It feels like a kick to the gut, me lying in the ditch beside a broken life while I watch the back of God disappear from sight.

You can throw theological arguments at me all day long and it won't change that deep ache I feel, the sense that God really has walked right out on me.  Because how I feel, it's got nothing to do with the truth and everything to do with what I believe.

What I choose to believe.

Yes, I see it now.  How I've chosen despair because I've chosen to believe what my circumstances keep shouting:

I've been abandoned by God.

Maybe I don't really know the answer to that but I do know this--I've got a choice to make.  And maybe I'm not quite ready to believe that all this heartache adds up to a life hid in God but I'm ready to try to believe it anyway.

And maybe, just maybe, this is how it always begins.  That desperate eleventh-hour choice to try one last time to find God in the pitch black and believe, for one more hour, that all is not lost.

So I make a choice and I start small.  I write out those words like a mantra half-a-dozen times a day.

I choose to believe You're near and mighty to save.

Until it silences me.

Because I might've thought I was burying this wounded soul beneath a whole mountain of quiet, but there's no burying of that aching fear of abandonment.  No, it's always the one doing the burying until all that's left is a gnawing loneliness and an unspoken certainty that we truly have been abandoned.

A friend, she says it right when she declares that we're always keeping track of something.  And if we're not counting up His gifts and His goodness and His grace, then we're counting up all the ways we've been let down, hurt, forgotten, abandoned.

So I dig out the gratitude journal from where it's been hiding and I refuse the guilt over having left it this long.  Because I took the dare all those months ago.  The dare to find joy in all the days of a year.

And when you're feeling abandoned by God, isn't the search for Him the only thing worth doing?

We are not abandoned.

And we are not without hope.

Since this post is already long and full, excerpts from the gratitude list will be saved for another day.  Thank you for grace.
Brokenness Joy Dare 2012