September 25, 2010
About two weeks ago, my childhood friend B gave birth to her fourth child and second son.  You can see pictures of the little guy over on B's blog.  Cute, yes?  B's oldest child was the recipient of my first-ever crochet blanket, so I've been continuing the tradition with each of her children.  I feel a bit badly, however, that my blankets have gotten progressively better and more interesting since my first attempts.  I feel as though B's first two children might have gotten jipped in this process!  Maybe someday I can make it up to them.

For B's newest baby, I opted to go with the colors of fall--or "tree colors" as I used to call them.  I used my favorite yarn for baby blankets, Lion Brand's Homespun in Olive, Herb Garden, Barley, and Earth.  I tried out the classic "granny square" stitch pattern for the first time, which resulted in a square blanket rather than the traditional rectangle.  I was attempting to create a color progression from solid green to solid brown, but the yarn color variations were not exactly as I had hoped they would be and I'm not sure my color progression is very clear.

Here are some pictures: 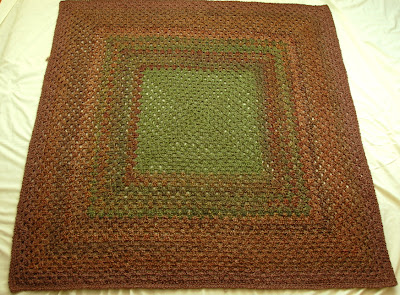 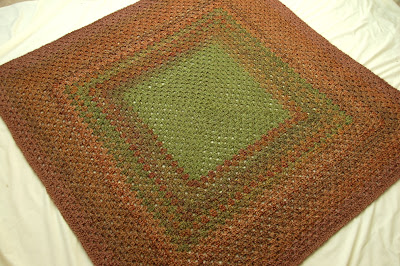 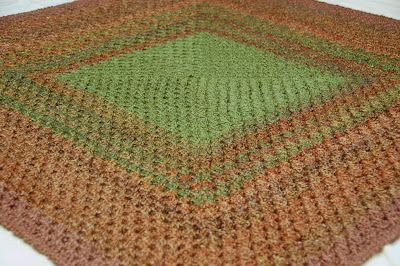 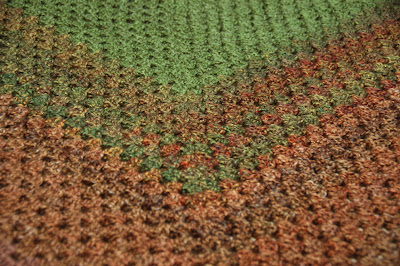 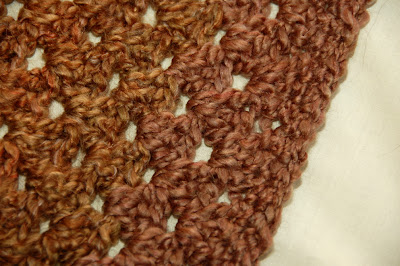 I had fun working in a square rather than horizontal rows--it felt like I was making progress more quickly when, after the first sitting, I had the equivalent of a potholder rather than a long skinny row of stitches.  I also really like the idea of the color progression and would like to try it again with a different selection of yarns.