For the Love of Tea

October 08, 2009
By now, most of you are probably aware of my love for tea. Oddly enough, I arrived at this relationship with tea by default. Having no tolerance for chocolate or coffee, I was left with only a few hot beverage choices: Apple cider, steamers (steamed milk with flavoring added), and tea. When I went on my first serious diet at age 18 (and lost 20 pounds, I might add!), I realized that tea had no calories and, thus, tea became my drink of choice. How glorious to find something that had flavor without calories! A few years later, my doctor told me I could drink herbal and decaf tea instead of water. Hallelujah! I have since grown to appreciate water in its own right, but I am still quite thrilled to get half of my daily water intake via something that actually tastes good.

Over the years, my love of tea has grown immensely. In my last house, there was a built-in floor-to-ceiling shelf in the kitchen that was perfect for holding my tea collection. A friend off-handedly referred to my shelf as the Altar of Tea and the name stuck. Here's a picture of the Altar of Tea before I moved: 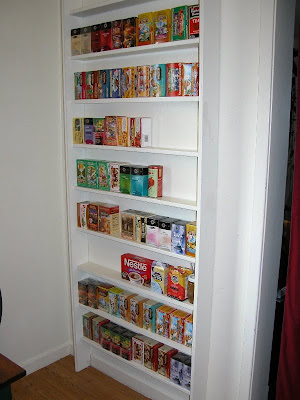 My current tea shelf is a bit cramped and not nearly so perfect as the last, but we (as in, the tea and I) are making do just fine: 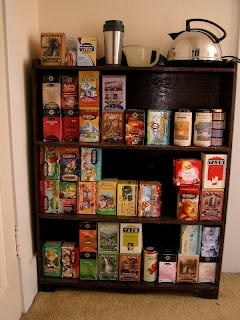 Earlier this year, I began to dabble in the wide world of loose leaf teas for the first time and realized just how little I knew about tea. I am still learning and experimenting with different types of teas and the various methods of steeping, but I am enjoying this new venture immensely.

This past Saturday I took the day off and my mom and I attended the Northwest Tea Festival at the Seattle Center. It was splendid! We had a bit of a rocky start due to some parking issues—which were horribly aggravating at the time but eventually became quite humorous once they were resolved. After that, everything was wonderful.

Along with a free goody bag of tea and coupons, we received these adorable little china cups for making a $5 per person donation: 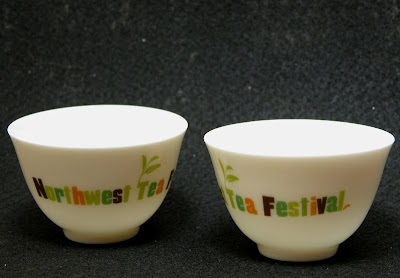 The cups allowed us to sample teas from all the vendors at the festival as well as participate in the tea-tasting sessions being offered.

First we went to the Tea 101 presentation by Ken Rudee, Owner and Director of Tea for Barnes and Watson Fine Teas. He has traveled all over the world in pursuit of tea and it was amazing to see his photographs of the tea-making process in various countries and discover how the tea plant becomes the tea in my cup. It was a great introduction to the different types of teas (white, green, oolong, black, pu-erh) and tisanes (rooiboss, honeybush, and other herbals) and I took a bunch of notes to help me remember some of the information. Of course, there is much I still don't understand about all of it, but it was a good place to start. After the class, we went through a couple of tea tastings and then slowly made our way through all the vendor booths, checking out their wares, hearing about their teas, and tasting their samples. All together we spent about five hours at the festival and enjoyed every minute. My mom sampled tea like a champion and enjoyed many things I didn't think she would. In the end, we came away with all these teas to try, some of them purchased and many of them free: The best discovery for me was the vendor Remedy Teas, a local organic tea company with a café in a nearby Seattle neighborhood. They had two iced teas and two hot teas brewed up for sampling and each one was unique and equally delicious. I purchased two of them on the spot and will definitely be buying more of their tea in the future. What's even more exciting is that the Remedy Tea Café offers vegan alternatives for both their drinks (such as their tea lattes and smoothies) and their foods. I'm not actually a vegan but I'm currently unable to eat eggs and dairy products, so vegan options are a lifesaver when eating out. I absolutely can't wait to visit the Café!

We had a blast at the NW Tea Festival and I'm very glad we went. I would highly recommend it for anyone who enjoys tea, whether casually or more obsessively like me. I'm already counting down the months until next year's festival!
Tea