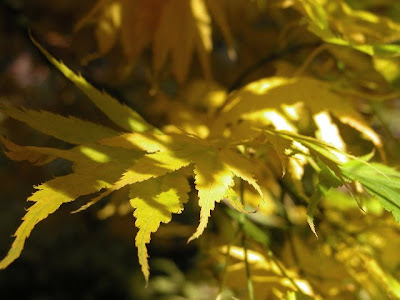 In view of my deliverance from Shame, this question remains: Why did Shame still affect the way I responded to God in the wake of Nathan's death? The answer, of course, is complicated. But you weren't expecting anything less, were you?

To begin with, I dare say that my release from Shame was not yet complete at the time of Nathan's death nearly one year ago. Although I have been an active participant in this process of accepting Grace and owning myself all along, it wasn't until a few weeks ago that I realized the significance of everything I have been doing in the past couple of years. God and His Grace have been at work without me knowing or understanding what they were up to. And I am thankful for that. It reminds me that I am not in charge of my healing. Although I must be willing and I must press on in the day-to-day working out of my faith, I do not have to see the big picture, understand what comes next or even what came before, or know how to find my way back to spiritual health again. These are all things that fall under God's jurisdiction, and I know from years of experience that He does them beautifully and beyond all expectation. This doesn't mean the journey won't be messy, deeply painful, and sometimes terrifying—most times it is exactly those things. But it means that I can trust Him to bring about Redemption in His way and in His time. And in the end, I will stand in awe of His handiwork.

I am starting to believe that Nathan's death and the subsequent devastation in my relationship with God were actually the final layers of my healing from Shame. When I worked my way through Philip Yancey's book on prayer a few months ago, I was struck by the idea that God desires to be in relationship with us much the way we are in relationship with our most intimate human companions. It is not so much about superior versus inferior, authority versus subject. Rather it is more about partnership, more about give and take. Yes, God is sovereign, holy, and in absolute authority over us. But He wants us to engage with Him as though we are equals. He wants us to bargain, argue, and wrestle with Him just as Abraham, Moses, and Jacob did. These things not only develop and strengthen the relationship between us but they are also the very things that shape and refine our character along the way.

As I was pondering this new perspective, I realized the view of God I had been carrying for much of my life involved God being far above and superior in our relationship and me being a mere speck of human disaster whom God reluctantly allowed to exist in relationship with Him. And here, I believe, is where the influence of Shame becomes evident. My relationship with God began and took form almost simultaneously with the development of my bondage to Shame. I related to God within the confines of my unacceptability. Although I knew in my head that I was not saved by works, that I could not lose my salvation, those were far-off ill-defined concepts compared to the very real sense of worthlessness and impending rejection that I lived with day in and day out. It is no surprise, then, that the picture of God I came up with was heavily colored by Shame. My sins had been forgiven by the pardon of Grace, but I had not yet experienced the acceptance of Grace. And as long as I carried the burden of being an unacceptable human being, I was incapable of engaging with God on anything close to equal footing.

When Grace began to take root in my soul, I slowly came to believe that I was worthy of acceptance and worthy of being loved by my Creator. I even started to consider the possibility that Grace would never reject me. But I did not know that my view of God and my understanding of our roles in this relationship needed to be redefined in the light of Grace. Or perhaps I simply wasn't ready to do so. Over time, I came to trust that God would not reject me or treat me as if I were worthless to Him, but I think the fear of that still lurked beyond the edges, waiting for the right moment to make a grand re-entrance.

When Nathan died, it felt as if my prayers for him did not matter to God, as if I did not matter to God. More than that, it felt as though God had burdened my heart to pray for Nathan knowing full well that He would not answer my prayers. This left me feeling set up for the devastation that followed Nathan's death. If I was valued, loved, and accepted by God, why would He treat me this way? In my Shame-filtered view of God, there was only one answer: Because I was worthless and God had finally cast me aside, just as my worthlessness deserved. As this belief settled into my soul, my heart shut down, my walls went up, and I cut off relationship with the One I had loved more than life.

It would be months before I understood what had happened between God and me. Even longer before I realized the role Shame had played in this. Longer still before I would be ready to open my heart again. But all the while, God was at work, prying away the last shackles of Shame. As I reevaluated my beliefs about sovereignty and prayer, recounted the redemption and deliverance in my past, and reexamined the effects of Shame on my relationship with God, I began to construct a new understanding of God—an understanding that was no longer darkened by the shadow of my Shame. In many ways, He was very much the same—Redeemer, Deliverer, Ever-Present Help, Comforter, Defender, Healer. In other ways, He was vastly different—reserved in His sovereignty, respecting of our free will, aware of our suffering but not involved in the choosing of it, changeless in nature but responsive to our prayers, desiring of our highest good but knowing it will not always come to be. But the most important difference was this: I now knew in every corner of my being that God was the Giver of Grace—Grace that accepted me completely, Grace that deemed me worthy of acceptance, Grace that would never reject me. And after two long decades, the chains of Shame were finally broken.

In truth, I do not know the precise moment when I fell into the arms of Grace, no longer held captive by Shame. In many ways, there was no precise moment. It was more of a gradual letting go of the lies I believed and an equally gradual taking hold of the truth. But at the same time, I also believe my healing was not fully complete until the day I revisited my Shame and realized that it was no longer mine, that I belonged to Grace, that I had been set free. For that reason, I will always celebrate August 4, 2009, as the day when Shame fell down in defeat and I became a child of Grace. It has not been any easy road. This is not the path I would have chosen, for me or for Nathan. But as I am nearing the end of it, I find myself rejoicing in our Beautiful Redemption and the One who brought it about.
God Grace Growth Healing Nathan Shame The Story