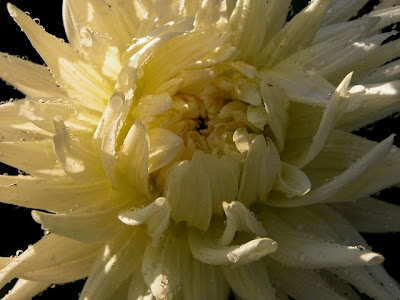 On the day I finished my last post, I popped in a new CD to listen to. Okay, when I say "new," I mean I bought it recently at the Goodwill and hadn't yet had a chance to listen to it. Seriously, if you are willing to spend a little time searching through the un-ordered stacks of CDs at the Goodwill, you can't beat the $2.99 price tag. I rarely buy music elsewhere these days. This particular CD was Joy Williams' 2005 release entitled Genesis. I had never listened much to Joy Williams before, other than a couple songs I heard on the radio way back when I actually used to listen to the radio. But again, the price was right, so I decided to buy it and give it a listen. I'm glad I did. And I'm quite certain it was no coincidence that I found myself listening to this CD just hours after finishing one of my most difficult, emotional, and progress-inducing blog posts to date.

The songs on this album are about redemption, growth, becoming who we're meant to be, coming out of hiding, not allowing others' judgments to keep us from doing what God has called us to do, choosing to stay where God has placed us even when everything in us tells us to run. These songs are the story of my life. Or at least the story God has been writing of late.

Here are some of the lyrics that spoke to me:

We are not that different from each other

We just want someone to discover

Who we really are when we drop our guard

To anyone who thinks they're not good enough

To anyone who feels unworthy of love

To anyone who ever closed the door

Closed their eyes and locked themselves away

You don't have to hide

You don't have to hide anymore

I cry, Father, Father, forgive me

You say, Child, I already have

But the song that most caught my attention was "Say Goodbye," from which the album actually derives its name:

To the you I knew before

To the you I knew before

This is your genesis

When I looked up "genesis," I found the definition "a coming into being." And I can think of no better way to describe the incredible growth and healing that have taken place in my life over the past several years. This is my coming into being. This is my genesis. And I hear my God saying, "You are beautiful, Courtney. Beautiful redemption."

(If you are interested in hearing my favorite songs from this album, I've added a music player to the sidebar of my blog, just below the "About Me" section. I've set it up so that it won't start playing automatically (a pet peeve of mine!), and all you have to do is hit the play button if you want to listen to the songs I've added. I'm excited to be able to share the music I'm listening to and blogging about and hope you will enjoy it as well.)