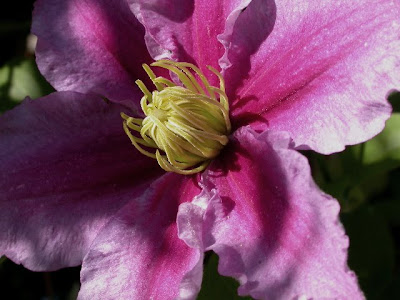 After reading this post about my faith story and the history of my relationship with God, you may be wondering about something: If God has been my most intimate companion for the last 6 or 7 years, why was I so quick to assume He had betrayed me when Nathan died? Why did I even entertain the idea that He had misled me or that my prayers did not matter to Him? Didn't I know God better than that? Well, yes. And no.

I did know God well enough to know that He loved me, that I mattered to Him, that He would not mislead or betray me. But my gut responses to Nathan's death were colored by a little thing called shame. Actually, shame is not little at all and seldom innocuous enough to be called a thing. More like a living breathing entity that has haunted me for most of my life. It is Shame with a capital S.

I met Shame when I was very young. But I did not know his name. I did not even know he was separate from me. Many years later, at the age of 24, I found this quote in a book I was reading:


A pervasive sense of shame is the ongoing premise that one is fundamentally bad, inadequate, defective, unworthy, or not fully valid as a human being.

When I was still a little girl, I came to believe deep down in my soul that I was indeed fundamentally bad, inadequate, defective, and not fully valid as a human being. I probably couldn't have voiced it that way but I certainly felt it. I carried these beliefs all the way into my mid 20s, even after I had been set free from the darkness of depression. I had no idea that what I believed about myself was a lie—a lie that had been whispered to me over and over by the one called Shame. But when I read the above quote, my enemy finally had a name. And I was devastated.

After all the work I had done and all the healing God had brought about during my early 20s, the revelation of such a deep layer of brokenness left me questioning whether I had made any progress at all. It felt as if my need for healing was now even greater than when my journey began. And the truth of the matter was this: I did not know who I was apart from my Shame. The only "me" I knew was fundamentally bad, inadequate, defective, not fully valid as a human being. If those things were not me at all, then who was I? What would happen if I threw out all the lies Shame had told me? Would I find that the real me was even worse than I thought? Was I brave enough and strong enough to find out? Well, no. And yes.

I may not have been brave enough but God had certainly deemed me strong enough. I picked up a copy of the book Shame and Grace: Healing the Shame We Don't Deserve by Lewis B. Smedes and began laboring through it much the way I labored through Philip Yancey's book on prayer. Never before had I read a book that so closely mirrored what I felt about myself. I found myself underlining and taking notes on every page. The first half of the book dealt with the intricacies of Shame. I learned that, surprisingly, there is a healthy form of Shame—shame with a lowercase "s," I suppose. As Smedes writes:


Only a very noble being can feel shame. The reason is simple: A creature meant to be a little less than God is likely to feel a deep dissatisfaction with herself if she falls a notch below the splendid human being she is meant to be. If we never feel shame, we may have lost contact with the person we most truly are. If we still feel the pain, it is because we are healthy enough to feel uncomfortable with being less than we ought to be and less than we want to be. This is healthy shame.

It is this shame that calls us back to our true selves, the people we were created to be apart from this fallen world. It reminds us of who God means us to be and the ways in which we are not living up to that calling. And it is healthy shame that pushes us to grow and change and move ever so slightly closer to the image of our Creator. This shame is actually a gift.

Although the Shame that shadowed me for most of my life may have begun as healthy shame, it quickly became anything but healthy. Smedes has this to say about unhealthy Shame:


It is a false shame because the feeling has no basis in reality. It is unhealthy shame because it saps our creative powers and kills our joy. It is a shame we do not deserve because we are not as bad as our feelings tell us we are.

Unhealthy Shame is not a call back to our true selves at all—it is a condemnation from our false self. This false version of ourselves is constructed out of all the "ideals" placed on us by others. It is the person we "should" be, according to the voices of secular culture, religion without grace, and parents who do not accept us. These three forces, individually and collectively, convince us that in order to be acceptable human beings we must live up to their expectations of us. Culture tells us that to be acceptable we must be beautiful, thin, smart, wealthy, powerful, successful, etc., etc. Grace-less religion tells us we are acceptable when we do everything that is commanded and nothing that is forbidden. Un-accepting parents tell us we will be acceptable only if we do whatever they expect of us. Falling short in any or all of this, we are left with only one conclusion: We are unacceptable human beings. And we are ashamed of how greatly we fall short of being the persons we have been told we must be.

This unhealthy Shame "is about our very selves—not about some bad thing we did or said but about what we are. It tells us that we are unworthy. Totally. It is not as if a few seams in the garment of our selves need stitching; the whole fabric is frayed. We feel that we are unacceptable. And to feel that is a life-wearying heaviness."

A life-wearying heaviness, indeed. A heaviness that I carried for nearly two decades. There was no one thing that caused my Shame. It was more like a perfect storm. My personality and my spiritual gifting, the abuse and its aftermath, my experiences growing up in the church, the dynamics of my family—all of this created an ideal atmosphere to foster the growth of Shame. By the time Shame's identity became known to me, I had been weighed down for so many years I no longer knew where Shame ended and I began. And I certainly didn't know how to be free from it.

As I moved into the second half of Shame and Grace, I realized there was no way to escape Shame. The only way to be free from it was to heal it, and my healing could only be found through Grace. For me, Grace had always been just another word in the Christian vocabulary. It had no real meaning to me, at least nothing tangible. I had a vague sense that it was important to my faith, maybe even essential, but I couldn't have told you why. Smedes defines Grace this way:
While I had experienced the pardon of Grace when I set out on my spiritual journey at the age of 7, I had never moved beyond that. Without the acceptance of Grace, I had no power to defeat the lies of Shame or throw off the weight I had carried for so long. But could I really believe that God, the Giver of Grace, accepted me completely?

Lurking behind the grip of Shame is the crippling fear of rejection. The knowledge that we are unacceptable human beings is made unbearable by the great possibility that we will be abandoned by those we most need to love us. The promise of Grace is that we are accepted without the possibility of rejection, that nothing we do and nothing we are can ever make God abandon us. And to a girl who had lived her life with the ever-present, deep-seated fear of rejection, such unconditional acceptance seemed far too good to be true.

As if this acceptance wasn't hard enough to believe, Grace takes it one step further. Grace tells me that I am worthy of the acceptance it offers. How can this be? Aren't I, like all of us, just a sinful wretch deserving of God's wrath and unworthy of the Grace He offers? Well, yes. And no.

I am a sinner and, because of that, I deserve God's wrath. But I am also a human being, created in the image of God and created with infinite worth. Grace tells me I am worthy of being redeemed from my sin, worthy of being loved by my Creator, and worthy of being accepted without the possibility of rejection.

Thus, after finishing the book, I put the matter aside and hoped that someday, somehow I would find a way to heal. But thankfully, and not surprisingly, my healing wasn't up to me. The One who began this work of Grace was not finished with me yet. Neither was Shame. But I'll let you guess Who had the last word.
God Grace Nathan Shame The Story