The Question of Sovereignty (Part 2) 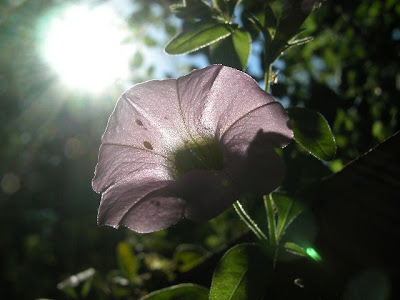 I think I settled on my previously held beliefs about God's sovereignty as a way of making sense of all the hurt and brokenness I experienced in the first two decades of my life. I wanted to believe that everything—both the good and the bad—had come into my life for a specific purpose, that God had chosen each thing for me as part of His ultimate plan for my redemption and refinement in His image. It terrified me to think that God was not fully in control of every detail, that He did not choose which "bad" things to allow into my life, that perhaps I was actually at the mercy of the Prince of Darkness. At that point in my spiritual and emotional journey, I was not strong enough to believe this and still move forward. I needed to feel safe enough to rise from the ashes where I had fallen. And I couldn't do that with a God who could not—or would not—protect me. I drew my comfort from the Old Testament story of Job and believed that God placed a hedge of protection around each of His children, that Satan could not harm us unless given permission by God Himself. And these beliefs served me well over the ensuing years, giving me the courage to heal and grow and accept love.

But when Nathan died and my neatly ordered spiritual life broke into pieces, I was forced to reevaluate everything I thought I knew about God. I realized that I could not reconcile my deep attachment to God's sovereignty with a world ridden with tragedy and unbearable suffering. Yes, my life was a picture of God's redemption. Much good had come from every awful thing I had experienced. But what of those whose suffering is never redeemed? What of the child who dies of starvation after a life of poverty and disease? What of the girls who live through years of horror in sexual slavery, only to die at the hands of their captors without ever knowing hope? What of the boys stolen from their families and forced to fight and die as soldiers when they are only children? The list is endless. Does God really choose these things for His creation? Can a God who is love, in its highest and purest form, be responsible for the greatest tragedies of humanity? In the face of these questions, the safety I have always found in absolute sovereignty begins to disappear.

In Prayer: Does It Make Any Difference?, author Philip Yancey says this:

Bible writers believed they knew why bad things happen: We live on a planet ruled by powers intent on blocking and perverting the will of God. The New Testament openly describes Satan as 'the god of this age' and 'the ruler of the kingdom of the air, the spirit who is now at work in those who are disobedient.' Of course bad things happen! On a planet ruled by the Evil One, we should expect to see violence, deception, disease, and all manner of opposition to the reign of God.

And so begins a new perspective on sovereignty. Yes, God is absolutely sovereign. But I have finally come to understand—or perhaps "believe" is a better word—that God has chosen not to exercise the absoluteness of His sovereignty for the time being. I believe He created our world to operate by natural laws, and while He can and sometimes does intervene, many times He does not. Most importantly, I believe now that God does not choose the evil that is allowed to come into our lives, but because He is omniscient He knows what it will be, knows how He is going to bring good out of it, knows how He will use it to refine us and accomplish His purposes. And I suppose this is where our hope lies—that even though the Evil One rules this present age and brings all manner of suffering into our lives, God is not surprised or overruled by it. God's purposes still stand and His work in us is still accomplished.

So how does this new understanding of sovereignty affect my view of prayer? To begin with, I realize now that prayer is multifaceted (here we go with the layers again!). My former perspective on prayer was not wrong—it was simply incomplete. Prayer is very much an exercise in intimacy. It is one of the primary means by which I come to know God in a deeper, more personal way. And it is my opportunity to share myself, too. Yes, relationship with God is unconventional by nature, but just as with any other relationship, I must spend time with the One I love in order to really know Him and be known by Him. Prayer offers me a way to "spend time" with the intangible and unseen God of the Universe. And when He draws near to me while I pray, I see Him and know Him in ways I could not otherwise experience. This pursuit of intimacy may be at the very center of prayer's purpose, but I believe there is more.

Philip Yancey presents the idea that prayer is meant to be a way for us to see our lives from God's perspective—that we should not be carrying all our requests upstream to God but simply climbing up ourselves, sitting next to God, and looking back down on the situations in our lives from God's perspective. In essence, this is the only way we can keep our eyes on what is important and not be swayed by our cultural and human experiences. It is the way our minds and wills and hearts can be transformed from a worldly view to a Christ-like one. And this allows us to see what God desires for the people and situations in our lives, which in turn gives us the insight to pray for them more effectively.

And here is where God's sovereignty most comes into play: I believe we are also called to use our prayers to intercede on behalf of the people and circumstances in our lives. While I never understood this before, I believe now that God's plan, both for humanity as a whole and for each of us individually, involves many things that He has deemed non-negotiable—meaning that no amount of prayer, no amount of sin or immaturity on our part, and not even the interference from Satan can change them. But for whatever reason, God has chosen to leave the rest of the details up in the air, so to speak. Philip Yancey writes this:

[C.S.] Lewis suggests that we best imagine the world not as a state governed by a potentate but as a work of art, something like a play, in the process of being created. The playwright allows his characters to affect the play itself, then incorporates all their actions into the final result.... Lewis says, 'The scene and the general outline of the story is fixed by the author, but certain minor details are left for the actors to improvise. It may be a mystery why He should have allowed us to cause real events at all; but it is no odder that He should allow us to cause them by praying than by any other method.'

This was really the turning point in my search for answers in the wake of Nathan's death. I realized that God did not mislead me about His desires for Nathan—I fully believe He desired Nathan's healing and redemption far more than I did. But Nathan's death at the young age of 18 was a non-negotiable part of God's plan. I think I was given a little glimpse of the heartache God must face so often—deeply desiring the best for His children but being ever aware of what the future holds for us. And many times that future reveals the fact that our healing will not come this side of heaven. Within days of Nathan's death, I told someone that I wished I hadn't prayed so much for him. I knew even then that it was my time spent in prayer for Nathan that made his loss so difficult for me to bear. But as I stand here now, I could not be more thankful for the way God burdened my heart for Nathan and called me to pray for him. I know beyond all doubt that if Nathan's death had been negotiable, my appeals to God's mercy and compassion would have spared Nathan's life. Do I wish God's plan had been different? Of course. My heart still grieves for everything that Nathan could have become in this life, everything he could have accomplished for our God. But I am learning to take comfort in the God who is sovereign and unchanging yet still chooses to be affected and moved to action by the prayers of His people. And slowly I am making peace—with Nathan's death, with myself, and with the One who brought us both into being.