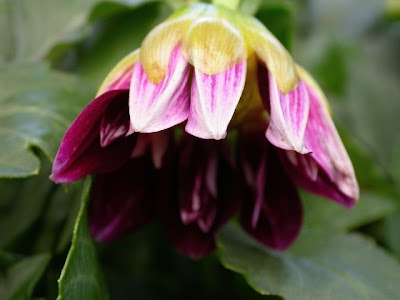 I have been trying for days to write the next chapter of this story I began last week. I am finding that what has taken place in my life over these past few months is difficult to summarize. This really should come as no surprise to me. After all the years God has been working in my life, I know very well that He consistently chooses the "downpour" method for me. You know the saying, "When it rains, it pours." Yes, that describes my spiritual journey quite nicely. Whenever God is at work to bring about some change or revelation or growth, He doesn't do it one thing at a time. It is quite often an earth-shattering, life-altering experience. And even when the path begins slowly and quietly, it rarely ends that way. My recent experience has certainly been no exception, and I am left struggling to speak some amount of order into the myriad of twists and turns this road has taken.

I think it was my letter to Nathan that first revealed the many layers of both my grief and my process of healing. Slowly I began to see what had been true from the beginning—this experience was not just about Nathan and his death, not just about grief and loss, not just about letting go and moving forward. It was also about God and His sovereignty, about prayer and its utility or futility, about my view of God and my understanding of my relationship with Him. In truth, though, I could not have put all this into words at the time I wrote my letter to Nathan. I was only just beginning to grasp the magnitude of what was happening. What I did know with certainty, however, was that the matter of prayer was central to my inability to move forward.

Only hours after Nathan died, I was already aware of how "unconventional" my connection to Nathan was. I knew it wouldn't be easy to explain the depth of my grief over Nathan's death, even to his family. I had known Nathan since he was very young, but for much of his life, I lived hundreds of miles away. I went back often for visits, but my closest relationship was with Nathan's older sister. In human terms, I did not "know" Nathan the way I know my close friends and family members. But during the last year of Nathan's life, I literally spent hours on my knees before the God of the Universe on Nathan's behalf. For those of you who are not intercessors, this may be difficult to understand, but when you stand in the gap for someone this way, there is a strong and undeniable bond that forms. And it is a bond that, quite literally, extends beyond the confines of this life. As I interceded for Nathan and pled his case before God time and time again, my heart became more and more attached to and invested in Nathan. My longing for him to know God's redemptive power in his life became nearly unbearable. And when he died, I experienced his loss as that of someone I deeply loved.

With prayer at the center of my relationship with Nathan, it is not surprising that prayer was also at the center of my struggle to make peace with Nathan's death and the One who brought it about. Although I did not realize it until shortly after I wrote my letter to Nathan, I stopped praying completely within the first few days after Nathan died. In my letter I mentioned praying "a lot of prayers since the night of the accident," but in reality I had merely been processing out loud, speaking (sometimes yelling) my grief and my disappointment into the air. The truth of the matter was this: I had stopped believing God was listening. As this began to sink in over the days following my letter, I no longer had any doubt about what was holding me back and keeping me stuck. Just as I was born an artist, I was also born an intercessor. Prayer has long been an essential part of the way I love and relate to the people in my life—and it is even more essential to the way I love and relate to the One who created me. In the absence of prayer, I no longer knew who I was or what I was doing here. Even more than that, I no longer knew who God was or what He wanted from me. Simply put, I was utterly and completely lost.

But the story doesn't end there. Even though I stopped speaking to Him, God never left me. Every step of the way He was diligently working towards my redemption, just as He has done in every other chapter of my life. Yes, it has been a deeply painful experience. But I can tell you without hesitation that it has been worth it. And I can't wait to tell you about it.